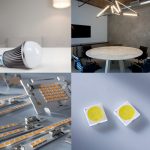 Next Generation LED Lights Find Their Place in Home Decor

Finding a natural looking LED light for the home used to be a difficult task. Their light was though efficient in office surroundings but too harsh at home. Next generation LEDs produce a welcoming glow and can be used as ambient, task or accent lights. When they first came on the market, LED lights were […]